Method 1: Put pig’s tripe in a pot full of water; add a spoon of salt, a swatted ginger bulb, a spoon of vinegar, a little wine.

–         If it is soft, take it out and steep it in cold water (you can add some ice cubes to make it colder). Now you have a pig’s tripe dish which is crispy, delicious and not tough.

Method 2: To make crispy, soft, tender pig’s tripe, you should boil it first, then put them in a bowl of hot water to steam it. Pig’s tripe will rise largely, crispy and soft. Moreover, you should not aromatize pig’s tripe with salt because it will be shrinking and very tough. 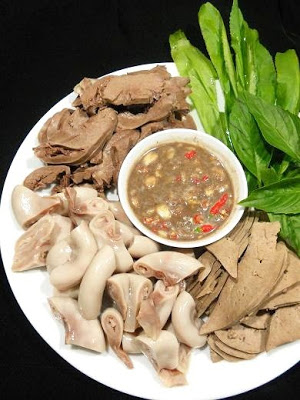 Method 3: Boil pig’s tripe until you see boiling bubbles, then take it out and dip it in a bowl of cold water. During steeping pig’s tripe in cold water, you keep boiling water used to boil it.

–         Boil pig’s tripe until you see boiling bubbles, then take it out and dip it in a bowl of cold water again.

–         Boil pig’s tripe until you see boiling bubbles, then take it out and dip it in a bowl of cold water for the last time. At this time, you should change water, put some ice cubes and several drops of lemon juice in the water. Certainly, pig’s tripe will be white, crispy and not tough.

Method 1: To have white, crispy, tender pig’s intestine, after boiling it, you steep it in a bowl of boiling water which is left to cool and added several drops of lemon juice.

– You should not put pig’s intestine in the pot of water at the beginning but clean it then put it in very boiling water. 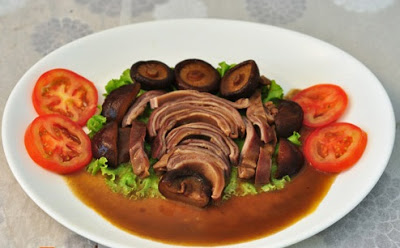 – Before that, you boil water diluted with a little alum (which is grilled) and leave it to cool.

– When pig’s intestine is done to a turn (in about 10 minutes after you put it in the water), take it out and put it in the alum water you have just prepared. Steep it until it is cool, then take it out and cut it into small edible pieces. By this method, pig’ intestine will be both crispy and white beautifully, not tough and blackened.